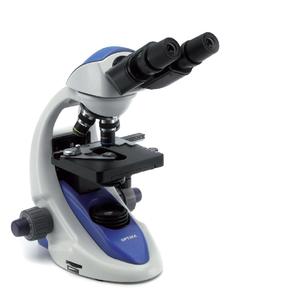 Optika Microscopes is pleased to introduce its B-190 series, the result of a perfect fusion between years of experience in microscopy’s field and a refined design study. At the moment, this series presents Optika's philosophy at its best: quality, reliability and innovation. The B-190 series is the Optika Microscopes’ answer to the challenge of the future of microscopy in teaching field.

Optical system
The optical system has been developed for demanding users; it consists of high quality components which assure an high image contrast and an excellent optical resolution. The optical components have been designed and treated with special techniques to prevent the formation of moulds and fungus.

Stand
The stand is characterised by a modern and ergonomic design. It is easy to carry the microscopes thanks to the large opening behind the revolving nosepiece to be used as an handle. The opening allows the user to see clearly the objectives and the samples, as requested in discussion groups.

Mechanics
The moving parts are made by means of machine tools with computerized numerical control reducing manufacturing tolerance and increasing the reliability of the instrument.

Illumination
OPTIKA Microscopes is proud to introduce a revolutionary LED powered illumination system. This system has been developed by their R&D dept. and consists of a new combination of LED and optical technology. A new high-efficiency single chip LED improved by a special optical system doubles the light intensity generated by an ordinary LED. The resulting light is comparable to the light generated by a 30W halogen lamp but with a colour temperature of 6300K: this means a white light instead of the yellow one produced by filament lamps. The electric consumption (3W only) proves the high efficiency of this system: the same light intensity with less consumption; 10% of an ordinary 30W halogen lamp’s consumption.
In addition, the lifetime of the LED is 50.000 hours instead of the 1.500 hours of an ordinary halogen lamp.

What makes the B-19s special is the binocular head.